The Next Great Baker : Brian Stevens


Buddy Valastro is the host of the reality hit The Next Great Baker which airs on Monday nights on the TLC channel.  Buddy took ten people and challenged them week after week to make cakes while the clock ticked away.  The winner of this amazing contest gets $50,000 and a chance to work with Buddy at his bakery Carlo's in Hoboken, New Jersey.

Not only is this show about being a great baker but it's also about time management, team work and facing cake disasters! We snagged a great interview with Brian Stevens owner of  Crazy Cakes. Here's a link to his  facebook fan page Crazy Cakes Inc.  -- stop on by his page, click LIKE and flip through some amazing photos!  Check out his great work at his website  Austin TX Cakes by Crazy Cakes Inc., - Home page. 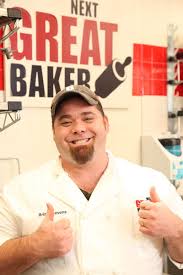 How did you hear about The Next Great Baker?
I was told about NGB from a friend Dena Bryngelson who won the Fireman's Ultimate Cake off.
Fans want to know what do you think happened with the cakes that were suppose to have effects go off (like the demolition cake) but just didn't work in the end.......was it a time management issue or just bad luck?
I think the Confetti didn't work on the 1st cake because I could not find a tube that kept the cake from pushing in on the motor that spun the cartridge to the spring loaded confetti tube. The cake pushed in on the motor and jammed it, I assume this since I was not allowed to look or touch the cake afterwards. The Pyro cake was damaged in the delivery accident when I was thrown 10 feet into the front of the truck. They didn't air the paramedics treating me and all of that but it was serious. I ended up getting full body X-rays and prescribed painkillers and Muscle relaxers. I will say this I have never had a Cake failure before or after the show. So I must have had some serious bad luck or was just too stressed out.
What was going through your head when Buddy let the wedding cakes fall off the side of the building?
What a Douche bag! Then I looked over the edge and saw the structure was still in tack and I had a big laugh.
Would you do the show again knowing what you know now?
No I do not think so; I would rather be part of something more positive. I am truly disappointed in now much the show was just negative drama. I do not care if that is what makes ratings we have a responsibility to improve our society and I really do not see how this did any of that.
What was the most important thing you learned from being on the show?
I learned 2 things, one negative and positive.
1st. In the public’s eye, perception is more important than the truth and that is the understatement of the year.
2nd. After the coverage of my zombie cake ran in the news, I was contacted by this lady. She said that her son loves Cake Boss and the work of mine they saw. She asked if I ever do workshops and what not for her 13 yr old son to attend. Here is the kicker he has 2 different forms of Brain Cancer and has had so many surgeries. I asked the mother if her son liked Comic books and games. After she replied yes, I invited them to the Sony Studio for a tour of the DC universe on line Game. She said that after he heard that, he wore his Superman cape all week. Well they came! It was hard because of the physical appearance this lil guy has as a result of treating his cancer. He could hardly speak mostly mumbles. But he was so amazing. He stared down every piece of concept art and I also gave him a demo of how we build the worlds. I gave him a signed poster of the game and the Eyeballs I saved from the Trex cake I became know for. The mother just wrote me back and said how inspired he is now. He is coming to the Austin cake show in Feb. I want to get him his own chef coat with all the NGB contestants’ signatures.
So here is what I have learned. We may become famous or any number of other things in life but please remember that we can do so much good from this and inspire others to do more or live more regardless of how long their lives are. There is no greater lesson to learn.
How did you get into cake making?
After 14 years developing Video games I wanted to get back to hand-made art. A friend made my son’s 2nd Birthday cake and I was inspired. 3 years later here I am.
You have amazing skills with carving and airbrushing.  Did you go to school for this or are you just a natural?
I have an art degree but I’m self taught when it come to cakes. I’ve been an artist my whole life. There was nothing else I was ever going to do. This is just a new medium for me.
What's your favorite type of cake to make?
I like any cake that is artist and expressive. I think that shows in my portfolio.
Has business picked up since you've been on the show?
I was slammed before the show and after the show.  I only do 3-5 cakes a week. With my average cake taking 15-30 hrs and my high end cakes hitting 100 hrs, they are out of average persons prince range. I am getting a ton of people wanting to work for me now. I don’t ever want to be as big as Buddy! He once joked on set about how Ron-Ben Israel would never make a cake twice. I was like, that is the difference, Ron is a true artist and Buddy is a production baker. It is a different mind set. I am very happy being an artist.
I just heard that The Next Great Baker got picked up for season two. Any advice for the people that make it into season two? Always remember it is a TV show 1st and a competition about skill 2nd! That may be the only thing that gets you through.

Today we're going to feature a great company called Oh My Gluestick. Tommie Alexander makes some fantastic party items! Oh My Gluestick has these cute invites with themes that are super cute!  Check out the monkey theme!  There are great print outs for making cupcake picks that match your invite theme.  I have to admit I love the sock cupcakes! Check out the fan page on facebook Oh My Gluestick.   There's even a great blog too!   http://ohmygluestick.blogspot.com/

*oh my gluestick photos can be viewed at the facebook fan page
Posted by Enjoy A Sweet Treat! at 8:22 PM